Here's a list of companies in the Scandinavia DLC for Euro Truck Simulator 2.
The list contains company name, company internal name (folder name), and cargo direction. io means in and out, while i stands for in. Marina is a bit weird, since there's no in or out folders in the DLC definition files. All these companies should show up in the next version of ETS2 Studio, but untill than, you can add them manually using our Company Template Editor in E2S options.

So, I have been getting a lot of requests to add the new Mercedes Actros 2014 (MPIV) to ETS2 Studio. Here's some good news - I'll add it really soon. In fact, the plan is to add it over the weekend, with a couple of other goodies.

But, if you're a bit impatient, you can always add it using our truck template editor.


Here's the data you need: 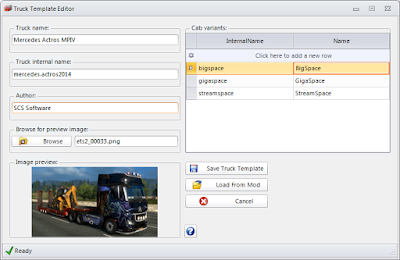 And that's basically it. :)

Looking into download data for current (0.6.1.8) version of E2S, I have seen that more people decided to use Uploaded.net link over the Dropbox one. Thank you for that! :) I appreciate it!

Don't forget to post your new Actros skins to ETS2Addons web site :)
Posted by Marin Malnar at 10:48 AM 5 comments:


it's been a while since we released ETS2 Studio v.0.6.0.7. For the interested, it was exactly 398 days ago. That's 1 year, 1 month and 2 days ago. Too long, to be honest. We were on the verge of dropping the whole project, but seeing the enthusiasm of the awesome ETS2 comunity, we managed to push on and find new strength to work on this.

You can read more on what was added, changed and fixed in our last blog post where we announced the release of the public beta. Releasing a public beta was a first for us, and it seems to be a success. At least, judging by the low number of bugs reported. To be completely honest, due to lack of time and proper gear, this was the only way E2S could get tested. We'll continue this practice for all our future releases.

So, what holds the future for ETS2 Studio?


Soon after this release we plan to release a quick update of the application. It will probably be numbered as 0.6.2 and it will contain new companies that were released in the Scandinavia DLC, new Actros that's about to be released in the 1.18 beta, and new trailers by Matdom.

After that, the plan is to start working on a bigger update - a trailer database editor, so you'll be able to import trucks like you can trucks and companies. Also, a 3D preview is in the works already as is a nice tool for modders, wich I'll keep a secret for now.

So, yes, there's a future for ETS2 Studio, and one day, ATS studio.

Enjoy the release, and let us know what you think about it on our forum! :)