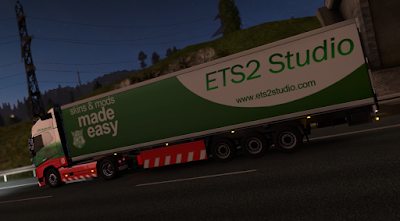 We're getting better at this! This time, it took us only four months to come up with a new version. And, what a version it is! To see what we have added in V.0.6.2, take a look at the post that announced the release of the beta version.

Since the beta, there was a couple of fixes and tweaks:

So, where can you find this new version of ETS2 Studio?
As always: on our Downloads page!

Don't forget - one of the major features of this release is the possibility to add your own trailers to the application. To read a bit more about the whole (quite complicated) process, take a look at the blog post where we describe the nuts and bolts of our trailer template system.

The last version of ETS2 Studio (v0.6.1.8) generated 26005 downloads. That's a staggering number that took us by surprise. Of course, we want to know what our users think, and that's why we have prepared a little...

It's a 10 question poll that will give us valuable insight into what you think about our little application. We would very much appreciate if you could spare some time and answer the questions. The poll is, of course, completely anonymous.

Of course, feel free to visit our or SCS forums if you ever need any help with the use of E2S.

Email ThisBlogThis!Share to TwitterShare to FacebookShare to Pinterest
Labels: Release